WACO – May 17, 2018, will mark three years since that deadly biker brawl at the Twin Peaks restaurant, and despite more than 150 people facing criminal charges, there has not been a single conviction. 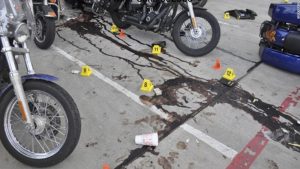 “The only thing I can think of they don’t want to try these cases,” said Greg Davis, former First Assistant District Attorney in McLennan County. “As a prosecutor, the cases that you really want to try, you try those cases quickly. The cases you have doubts about, you put those cases off.”

Davis spent several years as an administrator and one of the top prosecutors in Waco, but said he quit just before the shootout in May 2015 that left nine dead and 20 hurt.

Davis, who is speaking out for the first time, accuses District Attorney Abel Reyna of letting friends and campaign donors arrested for DWI and drugs go free. Yet, Davis explained, Reyna continues to pursue other cases like charges against dozens of the bikers despite flimsy evidence.

He detailed his concerns in an affidavit, naming several specific criminal cases in which he accused D.A. Reyna of “preferential treatment” in dismissing cases filed against friends and donors.