A reckless crew of ATV and dirt bike riders who were being tracked by Boston and Cambridge cops as they roared through the area on their off-road vehicles were stopped in their tracks by troopers on the Southeast Expressway today, where a handful of them were arrested, more than a dozen bikes were seized and one of them was shot in the foot, state police said. 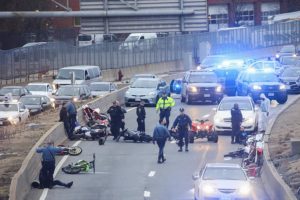 With the help of Boston police, state troopers set up a roadblock for the riders about 5:18 p.m. near Exit 18 on Interstate 93. Overlooking the highway from a nearby overpass, Herald photographer Nicolaus Czarnecki captured the melee as a team of troopers — some with guns drawn — tried to corral the pack of 25 to 35 off-road riders as they desperately attempted to get away. Some jumped off their bikes and ran, others hopped onto the back of other bikes, and some even tried to ride over the median and into oncoming traffic.

Several of the riders managed to evade police.

State police spokesman David Procopio confirmed that one of the riders — a 28-year-old Randolph man — was shot in the foot by a state trooper while he was being placed under arrest. That injured rider, whose name has not been released, was taken to Boston Medical Center to be treated for the non-life-threatening injury, Procopio said. Another rider who complained of pain was also hospitalized.

One trooper was taken to Massachusetts General Hospital to be treated for a knee injury suffered during the apprehensions, he said.

Seven riders were placed under arrest and about 20 dirt bikes and ATVs were seized and towed from the scene. State police didn’t immediately identify those arrested but said they were each facing a charge of disorderly conduct and numerous motor vehicle offenses and will be arraigned Monday in Boston Municipal Court.

The officer-involved shooting is being investigated by the Suffolk District Attorney’s office.

View all posts by Don V →
Indian Motorcycles that won’t be in Daytona
Motorcyclists ride to Fl. School to honor shooting victims