Two Fort Myers residents on a motorcycle were killed and a Cape Coral resident also riding a motorcycle was seriously hurt Saturday in a six-car crash on State Road 31 in DeSoto County.

The Florida Highway Patrol said that Anthony Neff, 58, and Susan Danza, 59, both of Fort Myers, were on Neff’s 2015 Harley-Davidson Electra Glide traveling south on State Road 31 shortly before 9 a.m. when the vehicle went left of center on a curve and was hit by a northbound Chevy Silverado 3500. 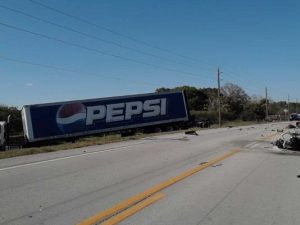 The FHP report said the Silverado’s driver tried to avoid hitting the motorcycle but the left front of the truck hit the front of the cycle.

The crash produced a chain-reaction collision between four other vehicles, including a semi-trailer and another motorcycle.

Kimberly Henson, 53, of Cape Coral and the driver of a 2002 Honda motorcycle, was also seriously injured and was taken to Bayfront Medical Center.

None of the drivers or occupants of the four other vehicles involved were injured.

The FHP said it was not known if Neff and Danza were wearing helmets. Henson was wearing a helmet, the report said.