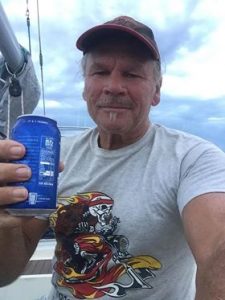 Hi to everyone for the new year. It’s about time you guys visited Aust. Exchange you get $1.30 for every $. Weather is pretty hot here now. We have the classics on at the track this weekend. A container each from America, England, New Zealand v.s, The Aussies. All on ex world superbikes that now have another 50 h.p. from when they were raced. Over 700 entrants with the other classes. Any of these meetings would be a great start to a trip? Next month is the world superbikes, hitting turn one at 250 k’s 6 abreast. Heart stopping action. Here is a picture from the hotrod show last weekend. It is a Brough Superior made in England in 1927. It runs a J.A.P. v-twin engine. Only 32 ever built with that motor. 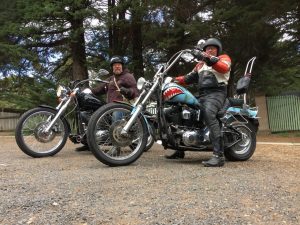 Value- $250,000. Take note of the alloy fin setup on the header pipes. The owner had a dig at me as most pic’s were taken of my indian chief. We had a good laugh. Next pic is of my good self in the Monster pits at the Moto G.P. I was the only outsider asked in for the entire week. All is top secret with micro seconds on the line. Team members pop in for a beer at my place after the races. Never thought in a million years that I could possibly be welcomed by The team as a special guest. Next pic is a guy that rides his knucklehead 12 hours to get here and home again. All original, she is reliable and a real head turner in the modern world. Last but not least is my mate John and I heading off for a ride down the coast for the day. He has just recovered with a bung leg from a woman in a car driving right in front of him. He got a nice bike as a replacement. My evo is still running like a train. T’was a good day. Watch out for all the idiots out there? Ride safe, Rog, from Downunder.