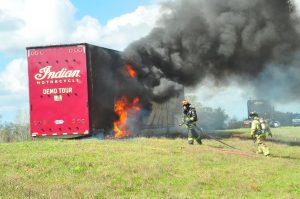 MCFR says it happened just after 11 a.m. near mile marker 262 in Madison County.

Officials say it started when the trailer experienced a tire blowout and the driver attempted to make it to the next exit before stopping. Another driver reportedly flagged down the driver upon seeing flames coming from the trailer.

The Florida Highway Patrol and MCFR responded to the scene.

No injuries were reported.

MCFR says the tractor-trailer and the motorcycles it was hauling sustained damage in the fire.

View all posts by Don V →
Motorcyclist killed when Careless Dick leaves car in middle of road
Unruly dirt biker takes one in the foot!