Awesome NEWS from Don Galbreath at WINDY ACRES
Hi Don V, I just got the approval from Fruitland Park for Halloween 2018. Please place this ad as soon as you can. (Ad Left)
That’s awesome and I assure you this will be an ADULT (NO KIDS) Halloween Spectacular. Live Music, Golf Cart Decoration Contest, ADULT Costume Contest. Looks like Body Painter The Pirate will be on hand to adorn some ladies  attributes also. So plan to
join us as we celebrate Halloween Biker Style. As soon as the bands are named named I’ll give ya the info.

UPDATE   Windy Acres & Scootergoods Magazine want to invite you all to a ADULT  HALLOWEEN PARTY weekend.
We will have some live music and plenty of other cool schitt to keep ya busy. And as always the pole is available for a little Hoochee Coochee if anyone wants too.Here’s The Deal Adult Costume Contest $$$ Adult Body Painting contest featuring artist Pirate. $$$ Free for all but you may Tip him for the work. Adult Bike Games, Adult Field Games. Golf Cart Dec. Contest and MORE! NO KIDS-NO FIRES Pet’s Allowed on Lease details at windyacresfestivities.com  Scootergoods Magazine is gonna debut a new $$$ prize  contest for those who don’t wanna show their whole melon. We are gonna hold the 1st ever SIDE BOOB painting contest. Free sideboob painting By the Pirate so get in to win some $$$. 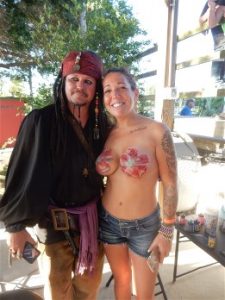